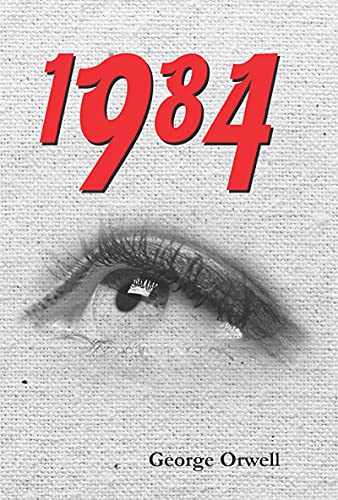 Welcome to my short and spicy book overview of 1984 by George Orwell, a man ahead of his time and gone too soon. The book almost made my “All Time Favorites“, that’s a selection of only 8 books that have had both a profound and long-lasting effect on my life.

Orwell wrote the last pages of Nineteen Eighty-four in a remote house on the Hebridean island of Jura, which he had bought from the proceeds of Animal Farm. He worked between bouts of hospitalization for tuberculosis, of which he died in a London hospital in January 1950.* RIP.

I had to read 1984 because it was referenced simply too often over the past few years..let’s go..

Generally, a sad book and must read. Really. When your eyes touch the words of this book your insides have a sullen, sad feeling.

While reading, I kept thinking this must be what it’s like in North Korea. Hopeless people who don’t even realize how hopeless and brainwashed they are.

Oceania, one of the three fictional superstates of the dystopian novel, is a lawless land for the powerful. To me, a book about what happens when flawed politicians get too much power.

Chapter 9 was a bit slow and difficult to read up until the end. Fair warning. Unfortunately, it was also the longest chapter saying almost 2 hours on my Kindle for this chapter alone.

Numerous words of a bygone era in this book! I had to look up more than my fair share. My favorite was “palimpsest” (def: something reused or altered but still bearing visible traces of its earlier form, think manuscript).

Another: Indefatigably, or persisting tirelessly.

Referring to the exploited people of war, Orwell says, “they add nothing to the wealth of the world, since whatever they produce is used for the purposes of war, and the object of waging a war is always to be in a better position in which to wage another war.” (Loc 2937) This line hit me.

For the rest of your life, please remember this most-powerful quote: “If he were allowed contact with foreigners he would discover that they are creatures similar to himself and that most of what he has been told about them is lies.” (Los 3054)

When you hear of the news about this country hating that country, these people don’t like those people blah blah blah, it is entirely and totally a lie. While the people hearing the lies may truly believe the lie, doesn’t make it true. If they/you/I were to meet the “enemy” we’d see overwhelming similarities.

That concludes my short and spicy review and summary of George Orwell’s 1984 classic book.