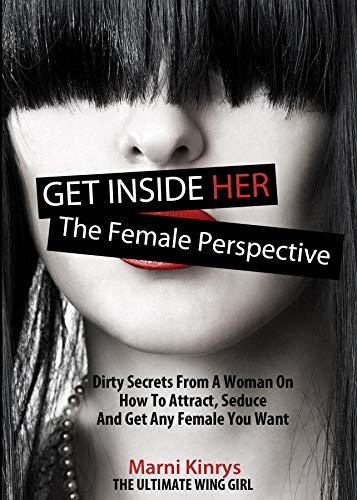 You are reading my book review of Marni Kinrys “Get Inside Her”.

If you don’t think taking out the trash is sexy, this book ain’t for you!

In the section titled “What Do Women Find Sexy?” where she surveyed 200 of her girlfriends, one responded (I assume jokingly) with the following that was actually included in the final edition: Taking Out The Garbage Without Being Asked. The respondent, Justine, claimed this would get her panties off in 30 seconds flat. (Loc 3386)

That’s about the extent of the value received from this book. And onto the “Not Recommended” potion of my digital bookshelf you go!

About halfway through the book, I had my conclusion. Remember in my book review of The Natural by Richard La Ruina, another dating advice book, I talked about knowing your author to know whether or not the strategies will work for you?

In this case, you need to know the readers. Who is Marni’s target audience? Who is she writing for?

Marni is writing for an average western man between the ages of 25 and 40 who have minimal experience with females, who use online dating predominantly, even before it was a thing (Match.com, OKCupid, etc.), who probably lack self-confidence, and who aren’t interested in beautiful women. That is to say, their goal is to attract a suitable woman.

I believe these men are more comfortable taking dating advice from a woman. The men who she’s teaching are probably not the type of alpha males (in 2022 this is socially adept, strong, masculine and probably intelligent and wealthy) that the most attractive women are interested in.

How do I know this?

The book is basically a collection of emails and the questions she’s getting are, well, very basic:

Or they’re just straight up strange: “She Brought her Ex on Our Date” (Loc 3266)…who needs advice for this?

You can tell from the emails that these guys really don’t get it. In one email the guy said, “I tried acting like an asshole and many girls liked me more.” What? LOL. It doesn’t work like that. I’m picturing a loser, nerd without social skills suddenly “acting” like an asshole, and women suddenly becoming interested.

Advice from someone better than you at something is a step in the right direction, but all advice is not good advice. I think the men she is advising basically can benefit from any advice. So that’s a plus. But there were a lot of signals in her writing, and especially in the entire dedicated chapter about the friend zone, that show her limited knowledge in this area. For example, the subject comes up about getting out of the friend zone and her response is baffling, “So yes, you can sneakily plant the seed. I don’t really know what that would even look like if you secretly planted the seed, like suddenly like grab her boob.” (Loc 3084) Really? You can’t think of any way a dude can plant the seed to a female friend that he’s interested in sexually besides doing something that most certainly wouldn’t work? For reference, I suddenly grabbed girls’ boobs when I was 11 years old in 7th grade.

I bought this book, hoping for some golden nuggets from the other lane. After all, it’s an entire book written from the female perspective. Men, me included, already know to not take dating advice from women because they don’t know what they want. The author even admits this “We may think we [know what we want], but usually we are wrong.” Loc 814 But, I was hopeful!

However, when I read this, I knew the book in its entirety was full of shit. “As I said before, I do not believe in trying to be someone you are not. I do not like tricks. I do not like pick-up lines. They are disingenuous and impermanent. I believe in honesty. I believe in packing oneself in the best possible way, in utilizing what you already have to attain optimal results. I believe in being the best version of yourself you can be.” Loc 1696

This is terrible, generic advice for men (active role). Probably good advice for women (passive role). It’s like telling your son going to a formal work dinner where maybe his future has a lot riding on it to do his best! That just knowing he is awesome and smart and capable is good enough! People will discover this on their own if they’re lucky! Here’s what you don’t need: a plan of researching the other attendees to know who you want to talk with, knowing what you might want to say as an icebreaker, getting a tailormade suit and haircut. None of it is needed if you are awesome!

Really terrible advice. If a guy is to avoid average women, of which there are a lot (lots of average men, too!), then he’ll need to take on a very active role in planning and practicing to get the very best. A lot of failure and embarrassment is needed. Remember, women are social superstars having thousands of interactions more than the average man of the same age. Unless you are a male model, you’ll have to force yourself to get bonus social interactions to try and get close to a woman’s level. This doesn’t just happen.

Lots of this: “Dear Marni, Thanks for all this brilliant information. The way you devote your life to helping people fulfill their dreams is admirable. You are clearly a good person, I appreciate that.”

I’ve already written too much on this book and I’m not going to “debunk” the entire book like a high school essay, but let’s just say that her arguments and evidence are weak, and a little bit suspect. Other Amazon reviews confirmed my suspicion.

In one email her student recounts a 3-page long word-for-word interaction he had with a woman over various days. Like word-for-word conversations between the two people in real life.

In another, she tries to debunk the common ‘be a jerk’ dating advice by using a student story who ‘was a jerk’ to a match.com date he’d not yet met. The student said that his being a jerk didn’t work. The woman had literally nothing invested. It was online. Not at all valid or relevant.

In many cases, her advice is objectively flawed.

In the longest response of the book to a client’s question on whether or not to pay for a first date, Marni says “as a woman I feel that only a real man will pay for the first date.” (Loc 2427) She goes on! “If a man asks me out on a first date then offers to go Dutch or holds out for me to offer to pay, it is so over.” (Loc 2427). The only problem is that she has misjudged, as most women do, what they would do in a dating situation. If she liked the guy, I can guarantee that she would see him again. For her not to have this basic self-awareness and advise men on how to get women is disheartening. But let’s assume that she would never see him again because he asked her to go Dutch on the first date. How silly, eh? So she’s going to potentially throw away the man of her dreams because of $15? It doesn’t seem like the guy needs to update his methods here. It seems like she would need to update her own. She goes on and there are so many things wrong with the entire section, but I’ll just leave you with this and stop: “The sexiest thing is when a man plans a date, leads the whole time, and then says, ‘don’t worry, I got it.’ This is the ultimate manly thing to do! Makes me melt just thinking about it.” Ok, just one more: “The only time it may be acceptable is when I ask a man out….how sexy would he be if he paid anyway!” (Loc 2441, bold added)

These are the most valuable tips in the entire book:

And for my favorite quotes:

I will end with an examination of the story of her first one-night stand. Basically what happened was that while on vacation, she met a guy who was staying at the same hostel. They went into the same room to hook up and she froze up. This gentleman realized her hesitation, comforted her, let her know she can stop at any time, and then they had sex. For Marni this was spectacular. The first guy who even did this to her. But, what was “this” anyways? This gentleman was using an introductory level game strategy to have sex with her. He did what other men, who were just trying to be the best versions of themselves and hoping she realized that too, didn’t do. For most other men, this wouldn’t be a natural reaction. To a man’s logical mind, what he see’s is an interested woman he’s entertained for the evening, probably spent money on, she has agreed to come to his room, onto his bed, and even start kissing and foreplay. The next step is sex. Then she freezes up, he’s bewildered, maybe continues anyways, maybe they have bad sex, maybe she randomly leaves, but it’s not a nice ending.

You read my book review and summary of Marni Kinrys “Get Inside Her”.