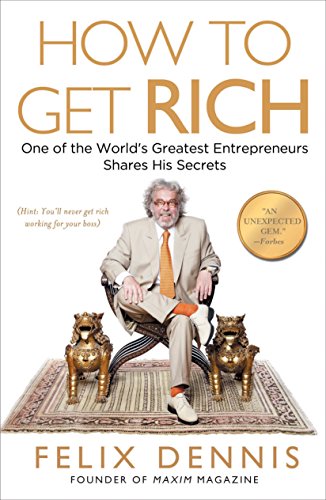 How To Get Rich

Welcome to my How To Get Rich book review and summary by Felix Dennis.

I finished reading How To Get Rich by Felix Dennis on November 9th, 2022.

“The chief value of money lies in the fact that one lives in a world in which it is overestimated.” (LOC 2555)

Halfway through the book, I discovered the author died in 2014 at 67. Admittedly he lived a good life during the accumulation of wealth, but he also says he spent too much time earning money, only retiring at the age of 52. Learning that still shocked me. He wrote the book in 2006 at the age of 59. He only had a few more healthy years left. Rest in peace Felix Dennis.

The book is not great. It is good, though. If I rated the book in terms of wine quality, it would be from Spain, not France. The highest marks are the ease of reading. I didn’t take many notes throughout because the concepts were more broad. But that maeks it easy to read before bed or when you’re trying to relax.

It’s not a how-to manual, it’s like a philosophy. I do love the writing style variation. Felix intertwines poems, alliteration, rhyming, stories/fables.

My big qualm with the book is the lack of explanation for important concepts. When talking about negotiations, Dennis says to “choose a rogue element to your advantage and bring it into the negotiation at a later stage. You’ll be amazed at how often this tactic produces results.” Wouldn’t you love to hear more about this?

Then he says to make annual bonuses generous. Well, what is generous!?! After 40 years of work, he can’t give some numbers on what worked for him?

“Being the best, or at least striving to be, will speed up the process of getting rich.” (LOC 4018) This is my advice to people figuring out what they want to do in life. I was an accountant. I didn’t like it. I earned good money. Zero passion. Eventually, I got fired. I wasn’t sure what to do back then, but now I am. If I could go back, I would tell myself that if I cannot be the best at what I’m doing, or near the top, then I’m doing the wrong thing.

In the chapter about ownership, Dennis is adamant about retaining 100% ownership always and forever. It would be silly to disagree with a man worth $750M, but I’ll dabble anyways.

He gives an example of 4 employees asking for 20% ownership in a meeting and he fired them on the spot. That 20% would have been worth $80M years later.

While I understand his reasoning fully, I’m not sure if I agree with it. So what if he had $80M less than $750M? Or maybe that means he would have $80M less multiplied by the many times he gave out that ownership? I don’t know the repercussion of that decision. Neither does he. But I do know the author values time above all else. If that decision required an extra 1,000 hours of his life to make the business a success, would he still have made that decision? Either way, his absolutism here seems unnecessary.

He then goes on to talk about partnerships which he seems to be in favor of, at first. After all, he is in a successful partnership himself. At the same time, it also appears he is against partnerships altogether.

You are reading my How To Get Rich book review and summary by Felix Dennis. Be sure to check out my digital bookshelf for 100+ book summaries.

Regarding negotiations, some tips shared by Dennis:

Felix Dennis has a wide vocabulary and here are some of my favorites:

The topic of fear comes up, over and over, in books on varied topics. Here’s Felix Dennis’s take: You cannot banish fear, but you can face it down, stomp on it, crush it, bury it, padlock it into the deepest recesses of your heart and soul and live it there to rot. Just try. Try for just a single day, a whole day when you refuse to acknowledge the fear of failure, fear of making yourself look like an idiot, fear of losing your lover, fear of losing your job, fear of your boss, fear of anything and of any kind. Fear will creep back, usually at three in the morning. Laugh at it and tell it to take a hike. Smash it in the teeth. Spit on it. Put your arms around it, and make nicey-nicey. Then slip a sharp blade into its stinking throat just as you’re French-kissing it. (LOC 4506)

I’ll end with one final bit of wisdom. “Technology changes. Tools change. the social landscape changes. Human nature does not change.” (LOC 4868) Keep this in my mind when you are trying to improve at anything.

How did you enjoy my summary and review of the book How to Get Rich?