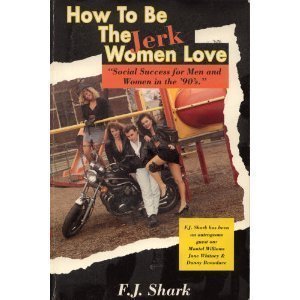 How To Be The Jerk Women Love

A summary and reflection on “How to be the Jerk Women Love” book by F.J. Shark. It was mentioned by a friend 10-years my senor as the first book he read about pickup and I thought a classic like this might have some golden nuggets as many of the books today are very similar.

“niceness” can be confused with hunger and desperation. An interesting idea in the foreward and something I need to think more about.

The authors definition of a Jerk: someone who gets the maximum benefits such as respect and priority in a relationship for putting in the absolute minimum amount of time, effort and energy

Another very interesting point made towards the beginning of the book is about inequalities present in all of life, espeically present in the workplace. People work 2-3 jobs and earn $30,000 per year and others work one and make millions. You want to be the person “who is paying cheaper dues and receiving a better membership.”

Another great point! “Social smoke screens.” When someone says one thing but does or acts differently. The obvoius example is the woman saying she likes a nice guy, but goes out with a jerk. (as an aside, the reason women say this is because when you ask them their ideal man, they have in their mind a guy way out of their league and if they were to get this guy, him being nice would be ideal because he is moreso a jerk to her as he’s not interested.) Other examples are when the barber says you’re not going bald, a woman says she’s love to go on a date with you but disappears with the question, investors saying they’d love to invest, etc. Your success in life is due to how well you can see true reality which allows you to better predict the future.

F.J. Spark says it like this “success in anything from the stock market to relationships stems from investing in predictability.”

“For every woman who is behind their man and helped him become a success, there are 10 or 100 times more women who screwed a guy out of every penny he ever made.”