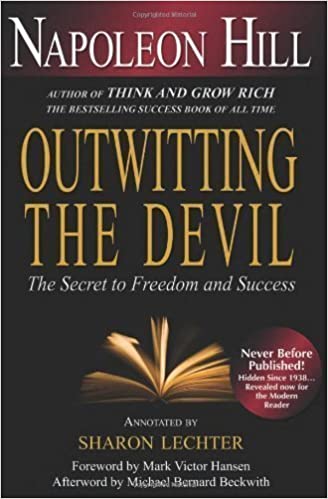 This came as a recommendation to me. The interview with the devil is a must. I will not ruin it for you by summarizing it. This book was originally written in 1938, but never published until 2011.

The most powerful quote from the book: “every adversity brings with it the seed of an equivalent advantage.” It’s October 2020 and we’re in the middle of a worldwide pandemic called COVID. Yes, it’s bad to lose a job. Terrible to lose a loved one. But these extreme situations come with benefits. Maybe you hated your job and it was driving you away from your wife and children. Now’s your opportunity to start fresh. Maybe losing your loved one, brings you closer to the rest, make you value life more, maybe even repair an existing broken family relationship. For me, getting fired in 2015 turned my life into something from a fantasy where people are truly envious of where I’ve decided to go with it. In the economic crash of 2008, Airbnb was born, which I attribute much of my success to.

There’s an interesting concept in the book where human brains are “atrophied by habit.” I would describe habit as the opposite of creativity.

The publisher decided to have someone add in their commentary. I found this annoying and not useful. The commentary was not enlightening nor was it needed. The text, even though from 1938, is still very readable and relatable.

The book is full of useful quotes:

“Your only limitation is the one which you set up in your own mind!”

“The six most effective fears are the fear of poverty, criticism, ill health, loss of love, old age, and death.” Which gives you the most fear?

“A drifter has lots of opinions, but they are not his own. Most of them are supplied by me.” This quote will click after you read it in the book. I will not identify who the ‘me’ is or what ‘drifter’ means.

“I live in fear that someday some courageous person will reverse the present system of school teaching and deal my cause a death blow by allowing the students to become the instructors, using those who now serve as teachers only as guides to help the children establish ways and means of developing their own minds from within.”

“Minds which do not harmonize should never be forced to remain together in marriage or any other relationship.” Divorce or remain only partially happy or unhappy for your entire life?

“Many human beings discover their “other selves,” the forces which operate through the power of thought, only after some catastrophe deprives them of the full and free use of their physical bodies. When a man can no longer use his hands and his feet, he usually begins to use his brain; thus he puts himself in the way of discovering the power of his own mind.”