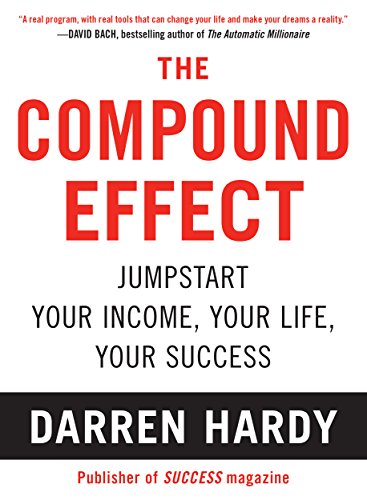 For being so popular, it’s a rather mediocre book with odd examples and one false comparison. You’re not going to find enlightenment here, but it is a feel-good book. It’s well written, easy to read, and appeals to basically everyone. I did garner some bits of greatness as covered below.

Here’s a summary: small, seemingly meaningless daily decisions add up over the long-term to a confident, successful, happy you or a timid, unaccomplished, depressed you.

The one thing that makes me question the entire book is when he talks about the difficulty of military boot camp. I’ve been and it’s not difficult. Hardy thinks that during boot camp “teenagers are transformed into lean, confident, mission-driven soldiers in only eight to twelve weeks.” This is laughable. Boot camp is the first step of many. In fact, the solider doesn’t even know his military career for the majority of boot camp.

How the author chose to start the book was a little puzzling. He is comparing the compounding effect of money to personal decisions in life. First, he talks about the doubling of a penny for 31 days where you don’t see much growth until the final days when you end with over $10M. He compares that to the story of three hypothetical men, one of which makes consciously positive decisions regarding his diet and romantic life, who doesn’t see any changes until the 28th month (like the 28th day of the penny doubling). That wasn’t a typo. Twenty-eight month. I think I understand his point, but if you’re making any change, especially one with your diet, the noticeable changes come in weeks, not months. It’s a good early representation of the disjointed writing style of the author.

He goes on to say “Have you ever been bitten by an elephant? How about a mosquito? It’s the little things in life that will bite you.” Again, I understand what he’s trying to do, but the analogy is a bad one. How about dogs? They bite. Or lions. Or crocs!

A little later he talks about momentum in relation to achievement and compares it to a spaceship using most of its fuel in the first few minutes dealing with gravity. But, momentum, as the author alludes to, has little or nothing to do with putting a spaceship into space. Massive amounts of energy from the massive amounts of fuel does that. Momentum has nothing to do with it.

I loved the “Weekly Rhythm Register” which helps you record what your weekly goals are (call 3 family members, meditate, write, etc.) and how much of them you’re doing

Favorite Quote: “I don’t watch or listen to any news and I don’t read any newspapers or news magazines. Ninety-nine percent of all news has no bearing on my personal life or my personal goals, dreams, and ambitions anyways.”