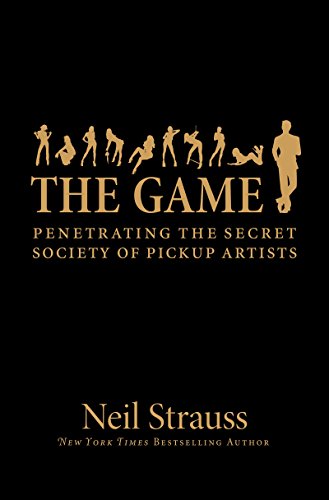 Not a how-to manual. It’s a story of a loser, depressed, young adult — Neil Strauss — when an opportunity of a lifetime (unbeknownst to him at the time) fell into his lap through his writing career. He entered the world of Pick-Up Artists and become, arguably, the world’s best. The book details his experience and wild stories including Project Hollywood where a few of the best PUAs lived including Mystery and the Real Social Dynamics folks which is a thriving business today.

“But who are we, really? Just a bundle of good genes and bad genes mixed with good habits and bad habits. And since there’s no gene for coolness or confidence, then being uncool and unconfident are just bad habits, which can be changed with enough guidance and will power.”

Talk in statement form instead of asking questions. Statements are how you speak with people you’re already comfortable with.

“The first thing you say to a woman matters very little. Some guys tell me they can’t think of anything or they need a really good line. I tell them they are thinking too much. You are not that important. I am not that important. We have never thought a thought so great that it  needs to be wrapped with so much care. Give up your need for perfection. As far as opening lines go, a grunt or a fart is sufficient.”

Talk slower. Fast talkers lack confidence and it’s as if they are worried they will lose the attention of the other person.

A girl who is quiet or doesn’t acknowledge you may just be insecure or shy. Don’t assume she’s a bitch.

“A significant percentage of violent crime, from kidnappings to shooting sprees, is the result of frustrated sexual impulses and desires of males.” I’d be interested to learn more about this. I’ve had periods of my life, more than I’d like to admit, where I felt totally insignificant to the opposite sex. It’s not a good feeling to be undesirable. Unless I’m able to let go, I get depressed, anti-social, and generally withdraw from society which leads to bitterness and a me-against-the-world feeling.