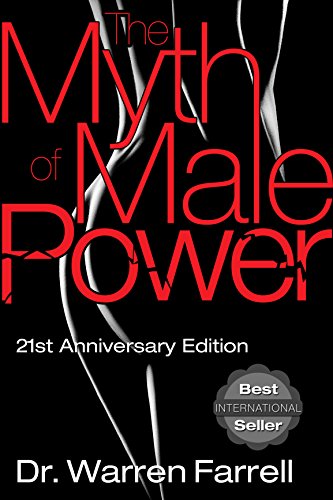 The Myth of Male Power

Wow! What an eye-opening book. Also by far the most depressing book I’ve ever read. It flips the script totally and thoroughly from ‘women are oppressed’ to ‘women are the protected sex’.

“This is a crucial message of this book because a core flaw feminism was the assumption that because a woman felt powerless that the man must feel powerful.”

You know when you hear or observe something that you know deep down you don’t agree with, but you’re not totally sure why? If you’ve felt that about how society acts towards men, this book is for you.

All around, I was told that women are powerless, they don’t make as much as men, they suffer from all sorts of hardships and crimes at the hands of men, etc. etc. etc. At the same time, I couldn’t found any of it. I had no disrespect for women. My friends and observance of society told me that there was general respect towards women no different than towards men. I saw women police, women in politics, women in sports, women in law, women in everything (well, almost everything as we’ll discuss below). My earliest role models were women (school teachers). In school, women typically were the smart students. Professionally, almost all the women made more than me in my department at Airbnb. Socially, I was constantly denied and rejected by women in favor of guys who treated them badly. When I was finally granted a date I had to pay for their part, and it seemed had to entertain them and prove my worth which they almost always didn’t accept and they were free to deny me and never hear from me again. It just didn’t seem like women were at all treated badly. In fact, quite the opposite.

Dr. Warren Farrell, the author, was elected three times to the board of the National Organization for Women (the only man to ever do that) having spent much of his life advocating for feminism.

It lays out the alternate reality that men live in where we think we have the power, but in fact, every way we turn, there are severe consequences.

Men can get convicted of raping their own wife (Australian man sent to prison as the claim was his wife asked him to stop and it took him 30-seconds to stop). https://www.abc.net.au/pm/stories/s265381.htm

We’re expected to pursue and persist (how many relationships started where the girl wasn’t initially interested?), but at the same time are the only ones to receive punishments for doing it wrong (rape charges, workplace sexual harassment).

Flipping the script of ‘male as oppressor’. I think there’s a lot of truth to what he says, though I’ll admit, the author has a bitter tone and some of his reasoning doesn’t seem rationale.

Where to start? How to summarize this book?

After reading the book, you understand how disadvantaged the man is in society, legally and socially. The woman gets a lot of leeways, even when it comes to killing (for example, there are 12 women-only defense for murder), than the man does not.

The author provides a lot of ancedotal reasoning which is invalid from a persuasion point of view. More stats and less indiviudal cases which I’ll admit are gruseum.

The author provides a unique viewpoint for why homosexuality is not accepted: a gay man does not provide adequate protection for women. For this, we called homosexuality immoral. The fear of homophobia was that no one would be providing for the next generation. Historically, we only tolerated it when we were no longer worried about survival (ie USA after WWII, Greek and Romans once they had the security of an empire). Do we really care less about the lives of men who are unwilling to reproduce and protect? Our initial lack of attention to AIDS – until it became apparent that heterosexuals were also at risk – makes our attitude quite transparent.

90% of divorces are initiated by women.