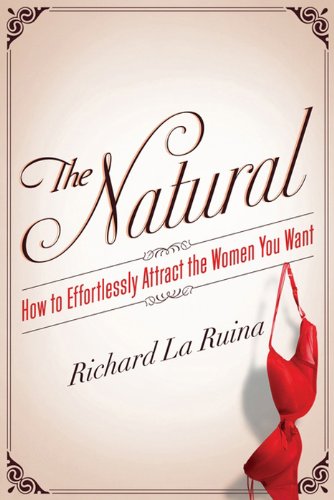 Book review of The Natural by Richard La Ruina.

It’s a good book. Let me start with that. One of the better ones I’ve read on this topic. However, something that I’ve learned recently is to know your author and where he came from because that will help you understand where the strategies are coming from and whether or not they will work for you. Said differnetly, a socially awkward man shouldn’t be learning pickup from Bad Pitt.

So, who is Richard La Ruina? And, why is that important?

Easily enough, Richard tells you in the book that he is/was a loser (I suppose like many reading these books). He wasn’t good with women, not popular, etc. Kind of the generic loser type. By the way, I make no judgments. Bill gates was a loser. Steve Jobs, too. I was probably, too.

Why does all this matter? Take Mystery and Style, for example. They are similar, in terms of personality, to La Ruina. They are losers. Again, I mean that in the nicest possible way. So they had to develop game for this persona (if they were extroverted meat head body builder,s they’d have totally different strategies for attracting women). And this persona is true for the vast majority of men. Most men are not naturals. Most men are not naturally attractive. But when the author says things like ‘anything that puts the conversational pressure on the girl you’re interested in is something that she could use as an excuse to end the interaction.”

At this point in my experience, I read much more than the words in that sentence. I read that the author’s game is for someone who wants to come in under the radar, someone who the girl isn’t going to find attractive right away, someone who needs more time to DHV. That’s fine. But, what if you’re not that? What if you’re a handsome, socially comfortable guy? Then the girl probalby wants you to stick around from the onset. She probably feels special just by the fact that you’re paying attention to her. If that is true, then this would be the wrong strategy for you. It would be inconsistent with who you are and she’d notice. It would probably come off as being unconfident.

So, what if you’re the attractive guy and the girls seems like she wants to end the interaction? It would mean that the girl just isn’t interested. If you’re a good-looking and confident guy and a girl expresses nervousness or clearly wants to exit, you should not continue talking. You should be socially intelligent and end the conversation. But also, if you’re good-looking and doing things right, the girl probably isn’t looking for a reason to exit the conversation unless she’s late for something important, her grandma is deathly sick, she’s depressed, etc. Something super important.

One of the bigger tips I got at this point is in “small talk”. I find there are three levels in life, for everything. Poor, middle class, rich. Young, adult, old. Ugly, average, attractive. Etc. La Ruina introduced me to the three levels in conversation in terms of linking ideas. Let me explain with an example. Often I live in Spanish-speaking locations and often someone says where they’re from. If she tells me she’s from Argentina, that is a piece of information I build a conversation on.

Level 1 – Not referring to it or being negative on the point.

Level 2 – Relate the point to your own experience. What I usually do is say that my Spanish teacher is from Argentina and say a few words with an Argentinian accent.

Level 3 (the gold standard) – Connect the link in a positive way while talking about her. Put yourself in her shoes, in her reality. That’s a soothing accent. I bet it’s a bit difficult for your to transition to the Spanish accent. I heard they call ‘almuerzo’ comida and ‘cuadra’ manzana. OR, a little more risque…Neat, but you don’t look like it. I heard Argentinian girls aren’t so attractive or are really tall/short (if she’s not).