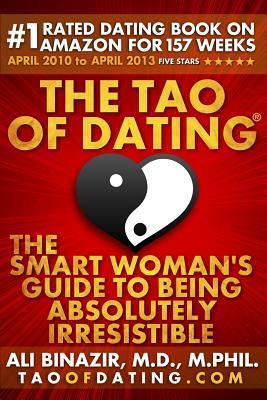 The Tao of Dating

You are reading my Tao of Dating book review and summary.

Overall the book is good, not great. Even though the author tries to make the reader believe his book is science-based, it is an opinion piece. Below I’ll mention the great points and some ill-advised ones. It’s interesting to note the author is male.

Most importantly, if you choose to read a self-improvement book whether that be in the realm of dating or fitness or money or whatever, my assumption is that you’re not satisfied (or unhappy) with where you’re at in that facet of life. If the book is too easy/agreeable to read, it means it’s not challenging your current identity enough and you should find another. A self-improvement book should make you uncomfortable. You should come away with a few realizations that you’ve been doing it all wrong for decades. That’s a powerful, gut-wrenching thought needed for change.

The premise of the book is that you’re mostly fine the way you are. High achievers laugh at the premise. While there’s nothing wrong with who you are or how you are, you could be better. We all could. That’s a much better mindset to have – continued improvement.

If you think you’re fine the way you are, if you think it’s not you, it’s him who needs to recognize your value, and you want someone to confirm your belief, this book might be for you.

Now, the book is not all bad. Towards the end, it does place some emphasis on women to be conscious about meeting men by going places they’re likely to find men they’re interested in. He identifies good venues as having the three C’s:

The author also is a proponent, as am I, of women making the first move.

I’m not talking anything outlandish like you see in a movie, but a simple ‘hello’ or ‘I noticed you’re wearing’ is good enough for the savvy male to understand what’s going on. The thing is, men have an incredibly high social and physical risk of approaching a woman. He could be flat out denied, socially reprimanded, or physically abused all from approaching a beautiful female. An initiating female is significantly more likely to be positively received by any male. I mean that. To be blunt, an ugly guy going up to a beautiful woman is only asking for embarrassment and hardcore rejection. But an ugly woman who approaches a man will be warmly received because it’s so uncommon. But that’s where it ends. Women do not pursue men.

The author suggests a tiered approach to showing interest from very indirect to actually starting a conversation:

You can also have a ‘distinguisher’. It’s something that makes conversation easier with you. It’s the same reason people wear name tags and say what country they’re from at language exchanges. It’s an easy ice-breaker.

An underlying theme of this book is that the average is good enough. In chapter 6 he states (without citation) that “the average North American woman is 5’4″ tall (163cm) and weighs 140lbs (63.5kg).” This is incorrect, but that aside, this would equate to a BMI just slightly below the overweight category. Are we now comparing ourselves to average? Unfortunately average in today’s world is not the something to be proud of. As a man, I aim for above average and I look for above average.

The author does provide more strategy for dating women:

One incredibly insightful point is made about online dating. It’s obvious when read, but often overlooked: “when you meet a man off the internet, it usually means that he’s not networked in – he’s a total stranger. This increases the likelihood that one (or both) parties will engage in socially dubious behavior since accountability is low.” The safest route to dating is from your network.

Here’s my two cents if a woman is trying to find a long-term relationship: make the man wait. Yes, it’s that simple. Make him wait a little bit longer for the first date. Make him wait a little bit longer for the first kiss. Make him wait a lot longer for sex. Why? Men know women want sex MORE than men. Yes, more. All we must do is get you excited. And, men are open to having sex with a wide range of women (call that his ‘net’), but we’re only interested in dating a small sliver of them. Every mans sliver is different, but every mans net is similar. Every man is open to entertaining a ‘net’ woman for the short term for sex. You can filter all these men out by letting them understand that he will have to entertain you a long time before sex. If a man really likes you, sex is a bonus, being around you and getting to know you are what most excites him.

“the kind of fish you catch has everything to do with the kind of bait you use. If you use your sensuality and sexuality as bait, you’re likely to end up with a man who’s interested only in your body.”