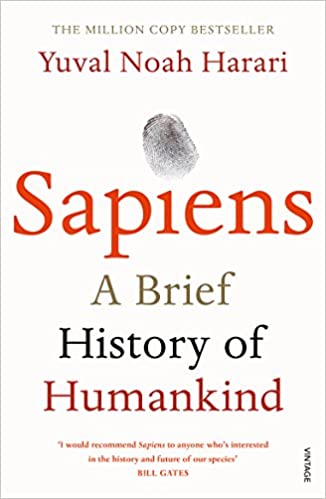 One of the best books I’ve ever read, should probably go on my all-time favorites. No book summary can do a good book justice and it’s especially true here.

There are so many profound ideas delivered through this book. The most recent I just read towards the end is about happiness throughout the ages. It’s only a factor of one thing: biology. If you want to be happier, you have to change your biology. If you have baseline happiness of 5, you may fluctuate to 7 or down to 3, no matter if you’re in jail, an 11th-century peasant, or a 21st-century tech CEO living in a penthouse. So, in theory, that 11th-century peasant living in a mud hut and eating the same grains every day would be happier than the 21st Century CEO if the peasant’s baseline happiness was higher. And if you put that 11th-century peasant in the 21st Century CEOs life, there would be no additional long-term happiness. That’s profound to me. A new way of thinking about an old topic.

I like how the book challenges religion by assuming its falsehood in the most brilliant way possible. Here’s an example:

“You could never convince a monkey to give you a banana by promising him limitless bananas after death in monkey heaven.” – who’s the dummy know?

The author does this 3x within the first chapter as if there’s no debate. There really shouldn’t be. Religion is fake. It’s invented by humans. It does serve a purpose, but many humans take it to a level it should never get (ie Islamic crazy people blowing themselves up for a fake god).

There’s another concept about imagination. A lot of our world, our modern world is totally imagined. It’s just an imagination in hundreds of millions or billions of people’s minds. It’s fake! Here’s the quote that best exemplifies this:

“Yet none of these things exists outside the stories that people invent and tell one another. There are no gods in the universe, no nations, no money, no humans rights, no laws, and no justice outside the common imagination of human brings.”

What are laws? Imaginary rules in our heads.

What’s money? It’s actually a physical thing but based on imagination. The US Dollar is based on a collective imagination.

The author is so logical. I fear too logical. Most people aren’t ready to accept his truth:

“It’s common today to explain anything and everything as the result of climate change, but the truth is that earth’s climate never rests. It is in constant flux. Every event in history occurred against the background of some climate change.

On race. This one is taboo:

“According to the sciences of biology, people were not ‘created’. They have evolved. And they certainly did not evolve to be ‘equal’.”

“Evolution is based on difference, not on equality.”

On religion. Not to brag, but I had this same thought. I think I’m in love with this author:

“Voltaire said about God that ‘there is no God, but don’t tell that to my servant, lest he murder me at night.’

Religion is so important for rich or well-off or powerful people. This was never more evident in India looking at dirty, three-legged, injured dogs hobbling over homeless Indians lying on the street, a 30″ chrome Lexus SUV wheel rolling by just inches away on the dusty streets. The level of inequality is only justified because these folks are so religious and must be obedient today to get to ‘heaven’ once they die without any recourse.

“[throughout history] Christians slaughtered Christians by the millions to defend slightly different interpretations of the religion of love and compassion.” LOL

“In the St Bartholomew’s Day Massacre, between 5,000 and 10,000 Protestants were slaughtered in less than twenty-four hours. When the pope in Rome heard the news from France, he was so overcome by joy that he organized festive prayers to celebrate the occasion and commissioned Giorgio Vasari to decore one of the Vatican’s rooms with a fresco of the massacre.” LOLOL religion

We always assume “god” is good. How about this take by the author: “there is a single omnipotent God who created the entire universe – and He’s evil.”?

“If even Muhammad, Jesus, Buddha, and Confucius – who knew everything there is to know – were unable to abolish famine, disease, poverty, and war from the world, how could we expect to do so?”

“For thousands of years, not only the greatest thinkers and scholars but also the infallible Scriptures had known only Europe, Africa, and Asia. Could they all have been wrong? Could the Bible have missed half the world?”

“Equality can be ensured only by curtailing the freedoms of those who are better off.”

“Scientists studying the inner workings of the human organism have found no soul there. They increasingly argue that human behavior is determined by hormones, genes, and synapses, rather than by freewill – the same forces that determine the behavior of chimpanzees, wolves, and ants.”

In summary, the author says that we have the notion that money is evil, etc. because in the past, there was no growth, there was no money creation. So for one person to get rich, they had to take more of the pie (the pie wasn’t growing) from someone else, thus they were bad people. “That’s why many cultures concluded that making bundles of money was sinful.”

“Youngsters are increasingly excused from obeying their elders, whereas parents are blamed for anything that goes wrong in the life of their child.”

Oh, and I learned a new word. Hubris is having excessive pride or self-confidence. I guess the formal way of saying cocky.