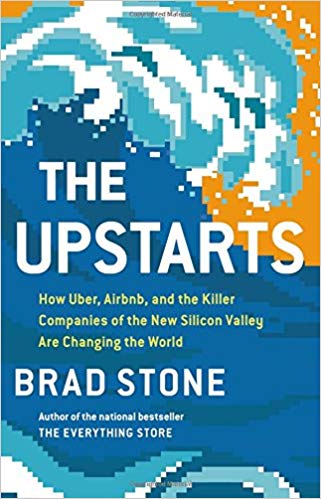 I devoured The Upstarts book in 11 days. Ironically, mostly in the back of Lyft and Uber’s on the way to one of the properties I manage on Airbnb.

Here’s a quote from p. 13 when I suspected I was going to be pleased by the end of the book:

“It is not a comprehensive account of either company, since their extraordinary sorties are still unfolding. It is instead a book about pivotal moments in the century-long emergence of a technological society. It’s about a crucial era during which old regimes fell, new leads emerged, new social contracts were forged between strangers, the topography of cities changed, and the upstarts roamed the earth.”

Translation: This book dives deeper into fewer issues in the 9-year history of both companies rather than covering a vast amount of topics with little detail.

Even though Airbnb and Uber are in the title of the book, it must have been about 70% Uber.

Overall, I felt the book was really well researched and well put together from a storyline point of view. The Uber/Airbnb stories crisscrossed nicely. Actually, I was surprised at the amount of overlap from the founders both attending the 2008 presidential inauguration (though, from different perspectives) to friendships formed between Chesky and Kalanick in the early days that last through today.

The book didn’t try to cover every topic over the past 8 years. Instead Brad Stone focused on fewer topics while adding more substance to them. As a prior Airbnb employee and an early adopter of Lyft and Uber, I still learned much from reading this book. Not to mention it was entertaining and more so based on storytelling rather than analyzing past events.

I was pleased to learn that my memory of history is accurate (well, kind of). The Uber as we know it today has Lyft to thank. In 2012 when Lyft put those pink mustaches on their cars in  San Francisco and popularized ride-sharing as we know it today, Uber was still a black car service for rich people. Uber copied Lyft about six months later and started allowing anyone to drive while offering lower cost alternatives to passengers. In reality, SideCar beat Lyft by about 2 months, but they no longer exist.

Uber has Lyft to thank. Lyft popularized ridesharing as we know it today with a pink mustache. Click To Tweet

The book went into an interesting history of Uber’s Chinese competitor, Didi Kuaidi (which means ‘honk-honk speedy’ in English) starting p. 303. It put some color to the news headlines, ‘Uber loses in China, sells to Didi.’

What would you rate The Upstarts by Brad Stone on a scale of 1 to 10?

You may want to check out my book review of The Airbnb Story by Leigh Gallagher.